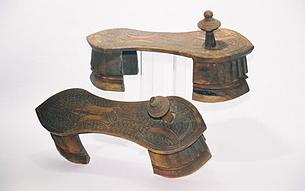 In the chilly Himalayan mountain northern regions of India, a variety ofbootsandshoeshave been made over the centuries to protect the feet from cold and rainy weather. These boots and shoes are made of leather, wool, and plant fibers. But since the weather in most of India is warm, shoes were not necessary, and for much of history, Indians went barefoot. Without the need for footwear, Indian culture developed a unique history of praising the feet.Mothersmassage the feet of their babies.Youthhonorthe feet of elders. Someone seeks forgiveness at the feet of his or her victim. Lovers caress each other’s feet to show their devotion. Indians traditionally keep their feet as clean as their hands, and even today villages often have at least one craftsman devoted to the manufacture of products to clean the feet, especially foot scrubbers made of stone or metal. Literature written as early as 2500B.C.E.documents the use of toe rings, ankle bracelets, and foot ornaments.Indianreligious and romantic literature abounds with references to the power of the feet, indicating their cultural significance.

But in the areas of India where shoes are not necessary because of the warm weather, footwear, although not worn daily, has become an important part of religious devotion and other ceremonies. Ceremonial footwear is beautifully made, decorated with embroidery, inlaid with precious stones and metals, and adorned with bells and tassels. Feet are also painted, dyed, and covered in ornament for special occasions. Footwear used forceremonyvaries from region to region due to India’s many different ethnic and cultural groups. Some of the most common types of shoes worn in India are toe-knobsandalscalled padukas, strapped sandals referred to as chappals, pointed shoes known as juttis, and tall boots called khapusa.