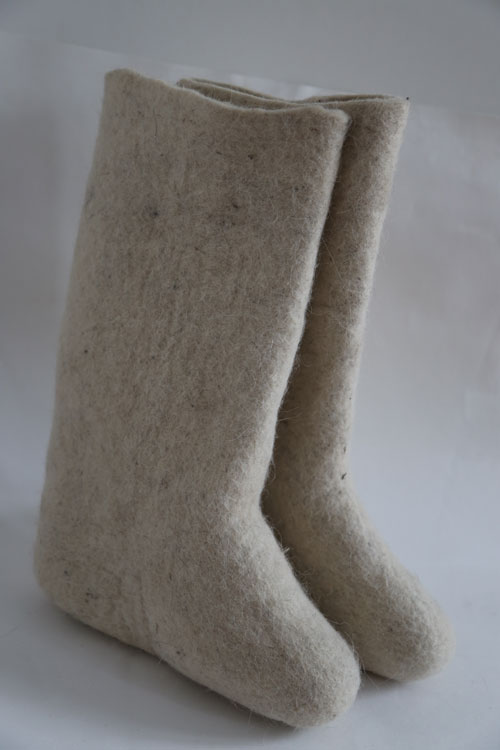 Valenki (Russian: ва́ленки; IPA: [ˈvalʲɪnkʲɪ]; sg valenok (Russian: ва́ленок; IPA: [ˈvalʲɪnək])) are traditional Russian winter footwear, essentially felt boots: the name valenok literally means “made by felting”. Valenki are made ofwool felt. They are not water-resistant, and are often worn with galoshes to keep water out and protect the soles from wear and tear. Valenki were once the footwear of choice for many Russians, but in the second half of the 20th century they lost most of their appeal in cities, due to their association with rustic dress.

Valenki (synonymic and semantic related expressions which mean the same – vа́lenukhi (pl.), vа́lezhki, vа́leni, vа́lentsi, kа́tanki) – warm felted highboots made from dried sheep’s wool; they are usually hard by their form, but there are soft types which are made for a corresponding footwear.

Valenki are a kind of traditional Russian footwear which is usually worn for walking on dry snow when the weather is frosty. Valenki wear out most quickly from the bottom and very often are soled with leather or other durable material to prevent this, so they are often worn with galoshes. Also, to protect from getting wet – they use a rubber sole, and there are valenki with glue-sew and molded soles. Traditionally, valenki come in brown, black, gray and white, but the last few years, consumers have been able to order these boots in a variety of colors (red, blue, purple, green, yellow, orange).

Valenki are included in standard of supplying officers and the ranks of the internal military service of the Russian army with warm clothes and gear.
Russian soldier on skis wearing valenki boots
Valenki stem from the traditional felt boots worn by nomads of the Great Steppe (including Southern Rus’), whose history goes back over 1500 years.

However, as it’s supposed, the boots appeared at the beginning of the 18th century. Valenki became widespread only in the first half of the 19th century, when they started being manufactured by industrial methods. Before this, they were quite expensive and only wealthy people could afford to have them. The increasing complexity of needs, the growing influence of the urban mores to the village caused the change of bast shoes with felt boots, and with it, the broad development of fulling production.

Valenki became less popular in the urban life in recent decades because winters in Central Russia turned to be more soft and slushy, and as result – lighter and waterproof footwear gradually won popularity and replaced valenki. Valenki are associated with a traditional rustic style of clothing; in cities they are usually worn by little kids, or they are worn by one and all in a severe frost, when other shoes don’t protect from the cold.

Before the revolution, the production of valenki was concentrated in the Semenov district of Nizhny Novgorod province, in the Kineshma District of Kostroma province, and in the Kukmor in Kazan province. In 1900, contemporary jackboot fulling factories of Russia produced 1.4 million pairs of valenki in the amount of 2.1 million rubles. In 1900, a pair of valenki cost 1.5 rubles, in 1912 – 2 rubles, at the end of 1916 the speculative price reached up to 12-18 rubles per pair.